If you have young daughters then you definitely want to carry on reading, as much as you also want to ‘look away now’.

Sadly despite the leaps and bounds we have made socially when it comes to beauty standards and how aware we are about the strength of messages we put out to young women, the new advert (which has now been pulled) for Red Shoes and the Seven Dwarfs can only be described as #fail.

“What if Snow White was no longer beautiful and the dwarfs no longer short”. 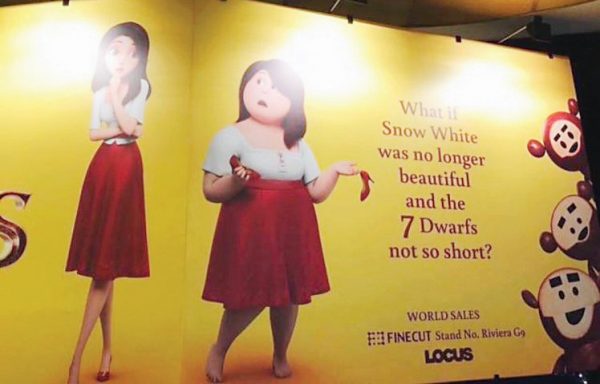 Actress Chloe Moretz, who voices the lead female character said she was appalled by the adverts, but while that is admirable now, presumably this advert overall depicts the subject of the film… Which is essentially, with magical red shoes, Snow White is beautiful… i.e. tall and thin. And without, she is ugly… short and fat.

Chloe’s rejection of the poster has been echoed by plus size model, Tess Holliday, as well a strong social media backlash which has seen the advertising campaign pulled.

While most people may laugh the ad off as a bit of fun or tongue in cheek, this only continues to cement the beauty standards that women are faced with everyday but the very real truth is that these messages are implanted in children from the youngest age. Young girls, by the time they are teens have already been told by society that there is only one type of beauty and that being beautiful is the most important thing in order to be popular and successful. And while we blame the likes of pop stars, social media and magazines for continuing to tell girls they aren’t enough, it is scary to think that the true and early message of beauty ideals is funnelled to children through entertainment directly aimed at them, something parents see as harmless entertainment but actually has the ability to begin to chip away at young girls at their formative age.

Described as a family animated movie, it seems that this film, directly aimed at pre teen girls is anything but. It is a damning visual report of why girls are suffering with a huge lack of self esteem.

But I didn’t want to judge before watching, so I took in the trailer, which aside from being sexually provocative, showing the ‘beautiful Snow White’ returning from an event and being spied on getting undressed – which is creepy at best for a children’s animation, during which the dwarves can hardly contain their excitement, before she kicks off her shoes and the dwarves abject horror at ‘fat snow white’ is palpable. Oh and of course fat Snow White lets out a loud belch, because, she is fat after all so must engage is stereotypical slobbish behaviour, she couldn’t be lady like and fat (just to hammer home the message)

Essentially this cartoon is packed full of terrible stereotypes (that anyone reading the film script Chloe should have realised the premise of the film) is to suggest that fat is ugly and repulsive to the opposite sex and slim and tall is the beauty ideal all young girls should thrive for.

If I had a daughter there is no way I’d let her see such drivel. Keep your body shaming films, our future women deserve so much more.