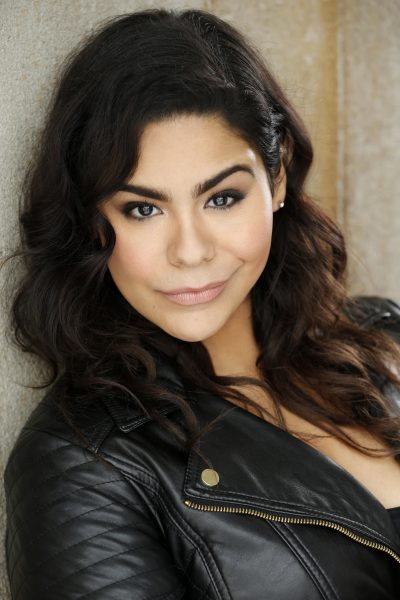 Hollywood has a long way to go when it comes to having decent representation of curvy characters in fictional works, but thankfully the original content for streaming services has opened up better opportunities. Someone you need to keep an eye on is Jessica Marie Garcia, a curvy comedian who shot to fame on shows like The Middle, Huge and Disney Channel’s Liv and Maddie. Garcia is making waves online through her hilariously shareable Betch sketch show and is now the proud owner of a little blue tick, due to her nearly 800,000 followers on Instagram. Before you write her off as just another ‘influencer’ getting a break due to popularity, Garcia has serious acting chops and has been performing on iconic comedy stages and shows in LA for years. Her most recent show ON MY BLOCK is currently streaming on Netflix, and is the story of a tight squad of four teenagers growing up in a tough Los Angeles inner city.

Garcia explains, “They are trying to navigate through high school while balancing first loves, puberty, and the ever-looming threat of gang violence. I read a tweet from a fan that put it perfectly. Think FREAKS AND GEEKS if it were directed by Spike Lee.”

Garcia leads a busy lifestyle as an actress, has been rocking the red carpet in the same clothes as J-Lo and even roomed with “This is Us” girl-of-the-moment Chrissy Metz. So, who is Jessica Marie Garcia? We caught up with her recently to ask her about her buzz-worthy projects, fashion, body image and what it means to be curvy in Hollywood.

Renee Cafaro: Has being curvy been a help or a hindrance in your career?

Jessica Marie Garcia: I’m sure it’s been both. The pool of actresses who look like me are smaller so I don’t compete with as many actors as the “skinny” ones do. So in a way that’s helpful but, in the same breath, I don’t always go for roles I’d like to play.

RC: How do you feel media/Hollywood needs to change in regards to body positivity and female narratives about confidence?

JMG: I think Hollywood needs to finally see that beauty isn’t a size or a shape. I get fan mail all the time praising my confidence and asking how they can obtain it, because all they see on TV is the “chubby girl” being sad, or picked-on, or unpopular. That’s not the real world, and I hope to help change that narrative by being unapologetically confident.

RC: How do you feel about size being used in comedy?

JMG: I think it’s up to the actor, what they’re comfortable with and the character they’re playing. As an overweight person and a comedian, I’ve joked about my weight before someone else can; it’s a defence mechanism.

What I think is most important at the end of the day is to respect people’s bodies and their choices.

RC: How has your body image and/or style evolved over the years?

JMG: My body image as a kid was the worst. I was one of the heaviest girls in my class, with big frizzy hair, a unibrow, and psoriasis from my knees down. I always wore pants to cover my legs and fried my hair to an inch of its life to be bone straight like all the “pretty girls” in my class. It was awful! But I’m lucky enough to have a mom who always made me feel beautiful, and even though she let me dress in some horrible outfits, I believed her. It’s funny how styles and trends change because now my legs are my best feature and people spend a lot of money to have my eyebrows.

RC: OK , and now for the fun stuff…Who are your favourite brands/designers?

JMG: I’m not a brand chaser, as much as I am
a self-proclaimed fashionista. I fall in love with pieces and not usually a brand per sé. Mixing and matching all the time. Like today I’m rock- ing an H&M romper with some Michael Kors sneakers. I will say, I’m not a “print” fan though (people love putting thick girls in wild prints).

I like sleek, chic, sexy, streetwear. I wore a dress by the Georgy Collection for my Netflix premiere and I was obsessed and so surprised with how their clothes fit me. Getting ready for a big event and working with a stylist that doesn’t only dress a size 0 is a challenge and knowing that a designer works for me, is life!

RC: Who are your style icons?

JMG: JLO, JLO, & JLO! She wore the same dress that I did for my premiere before me! Great minds think alike! From her streetwear to her red-carpet stunners, I’m always envious of what she’s wearing. I also love the way Ashley Graham dresses; so effortlessly sexy and sophisticated.

RC: What are your favourite things to do/ places to hang, on your time off in LA?

JMG: I’m fortunate enough to have an incred- ible squad of my own that I see on an almost daily basis. There’s about 10 of us and we’re almost always together. We spend a lot of time at each other’s homes, cooking “fr-amily” dinners and playing records. We are also on a softball team together so we have games once a week.

RC: So, lastly, you said you are friends with Chrissy Metz. You were roommates? How did you meet and do you stay in touch?

JMG: (Chrissy) an incredible human. I’ve known her since I was 16 and if it wasn’t for her friend- ship and guidance when I first moved out to
LA, I know I would have moved back home. We are both from Florida and had the same acting manager at the time. She was my first ever roommate and I hold those memories very close to my heart. I’m so tremendously proud of her, she couldn’t be more deserving of her success.

I love her, dearly. We absolutely stay in touch! She’s on tour promoting her book ‘This Is Me’, right now!

Watch ‘On My Block’ on Netflix and keep up with Jessica Marie Garcia’s many other projects by following @jess_M_garcia on Instagram.

Get S/S'19 style NOW - how to wear next season's fashion trends today - for all sizes.