Driving through the Cuban landscape as evening falls, face pressed up against the glass, I watch small, sleepy towns, with quaint porches acces- sorised with rocking chairs and open front doors. Passing through on our long drive to the Cuban Keys, I couldn’t help but feel slightly romantic about the towns time has forgotten. We’re so busy with our high speed broadband that it is funny to think one of the most beautiful places in the world to ‘gram’ often has no internet connection at all.

I’d found myself on a dream trip to Cuba, with MINTUR, the Cuban Ministry for Tourism,
for the 38th edition of its annual tourism fair, FITCuba. Travelling with many other journal- ists we were headed to Cayo Santa Maria, the latest jewel in the Cuban tourism crown, and one of the many reasons that the country boasted some 4.7million tourist visitors in the last year alone. No mean feat for a country that was battered by Hurricane Irma. But thanks to hard work, the country is recovering well.

While pop songs of the last year have heavily referenced Cuba and the Havana spirit, this Island is much more than an ice cool mojito and chart-topping tune.

A place of living history, Cuba is a country everyone must visit (at least once). A stunning Carib- bean landscape mixed with a heritage of Spanish architecture, this somewhat isolated island is now making a bid for tourism in a big way and opening itself up to invite you for whatever kind of adventure your heart desires.

From adventure holidays to beach relaxation and, it goes without saying, a wealth of history and culture, Cuba’s tourism industry is growing rapidly, welcoming 200,000 tourists from the UK last year; making it Cuba’s 4th biggest market for European visitors.

And while most will automatically assume that Havana is the only way to ‘do’ Cuba (more on that later), there is more to this Island than its capital city. 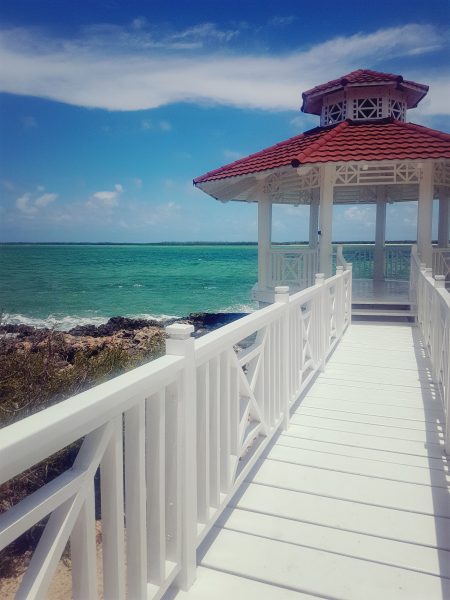 With the first hotel opening there in 1991, Cayo Santa Maria, is the place to be if you’re looking for a little fun in the sun. A key off the coast of Cuba, part of the Villa Clara Cayos or ‘Keys’, Cayo Santa Maria is joined to the mainland by a 48km purpose built road, allowing for easy tourist access. This old fish- ing town is now home to 17 purpose – built luxury hotels, most of which are all inclusive; all of them attached to some of the whitest sand and bluest seas you will ever lay your eyes on.

With 16 hotels to stay in, all of which directly walk you to the beach and offer facilities such as pools, spas, fitness centres, restaurants, bars and entertainment, it’s a difficult choice as to where to stay! Although if you’re searching for some much needed sunshine and cocktail time, Cayo Santa Maria is definitely the place for you.
We stayed in the hotel Dhawa Cayo Santa Maria, one of the newest hotels on the Key. The hotel itself featured a modern and stylish décor, with a small pathway walk to the beach where loungers are readily available to help you soak up those all-important hours in the sun. There is a good- sized pool which appeared to be open 24 hours and a swim up bar open during the day. As it is an all-inclusive resort, you won’t go hungry, or thirsty for that matter, with a 24-hour café, a buffet restaurant and sit-down dining, as well as late opening bars and a disco until the early hours. Rooms are housed in several blocks but facilities are close together, making this ideal for families as there aren’t long walks between each part of the hotel. 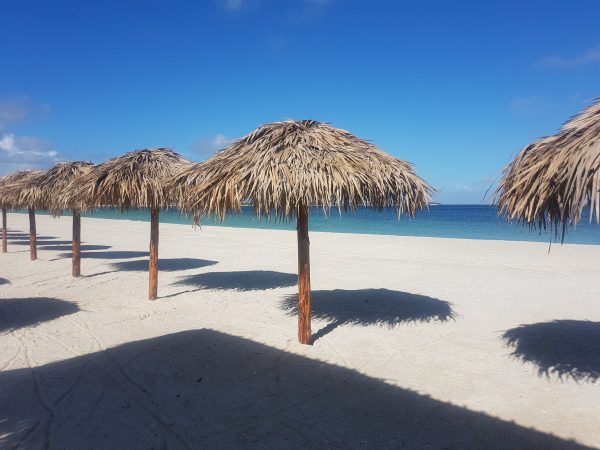 While sipping and sunning are definitely the direction for Cayo Santa Maria, it’s important to remember life outside the Keys. While the journey off the Cayo takes around 45 minutes, it’s definitely worth organising excursions dur- ing your stay so that you can get to see Cuba and the Cuban people in all their glory.

Tours and excursions can be organised with your tour operator or through the hotel. Here are some of our top tips on what to do from Cayo Santa Maria. 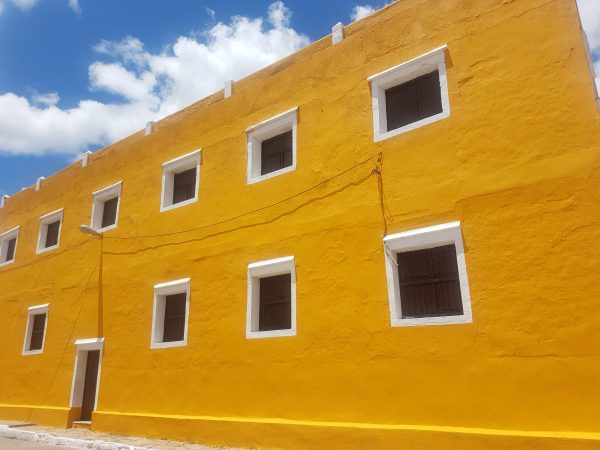 1. A day trip to Remedios is not just utterly picturesque (honestly it looks like something out of a painting). Start the day with a trip to an old sugar mill and try a traditional sugar cane juice drink before riding a working steam train. You can even take part in a rum and cigar pairing session to get that full Cuban experience. Or head straight to the source and visit a Cuban cigar factory. There are also several beautiful hotels around the main square that would make the perfect stop for lunch too.

2. Music is key to life in Cuba, with performance and live music a key feature in hotels, bars and restaurants throughout the country. It’s easy to believe that the entire country is simply born with innate rhythm and appreciation for song as you watch locals of all ages dance perfectly and with ease. And while the likes of the Buena Vista Social Club may be amongst the country’s biggest musical exports, there is more to the Cuban music scene than salsa. Dance and learn about Cuban Folklore in cultural and traditional activity with locals on the Tiempo De Rumba excursion to Caibarien City.

3. One of the highlights of our trip was watching the inauguration of Sagua La Grande as a tourist town. As we drove into town the streets were filled with people waiting to celebrate the momentous occasion to officially
name the city as a tourist destination, as it now has two recently renovated hotels.
Major attractions include the Palacio Arenas which dates back to 1918 which is being restored to its original charm of murals and marble staircases; one of Villa Clara’s most beautiful pieces of architecture and representative of the Island’s Art Nouveau constructions. While the Sagua hotel dates back to 1925, it is part of the government’s plans to reinvigorate the town with two new hotels to boost visitors to this historic port town.

Sagua La Grande is a perfect example of the old meets new that is striking as Cuba develops and opens up to more tourism. While buildings are spruced up to welcome foreign visitors, there is something deeply reassuring at still seeing horse and cart as a method of transport in this visually stunning port town that has retained the architectural heritage and beauty many travel to Cuba to witness.

Here we enjoyed the true Cuban spirit as a day of street parties with food stalls and live music allowed us both an insight into the importance of tourism to this magical island’s future and the thirst for life that this Caribbean Island has.

4. Stay on the Cayo but head to the Plaza La Estrella complex for a fun day out. With a host of restaurants, bars and crafts markets, there is also the most incredible spa with outdoor pools and hot tubs as well as massages taking place outside under gorgeous cabanas. A quiet escape from the hustle and bustle of your hotel for some real you time.

The most common question I’ve had since returning from Cuba is… was it everything you’d hoped? Which seems like an odd question to ask about a holiday but I think that pretty much sums up the air of beautiful mystery that surrounds Cuba. It is so incredibly picturesque that I think if I went back ten times I’d never tire of the rocking chairs lined up on the neat porches, or the mixture of outlandish Spanish inspired architecture next to a building that bears no relation; of the ox ploughing the fields or the train tracks with no trains (trains are not that frequent in Cuba despite the many tracks you will drive over).

So yes, it did meet expectations, in fact it exceeded them but I really can’t wait to return and be blown away again.

1. The Armoured Train of the revolution.
The Battle of Santa Clara was the tipping point for events in Cuba in 1958 as it was a city that was a key battleground for the revolution. The city of Che Guevara’s final resting place is suitably where he and Castro won the final battle that saw the defeat of Batista. Visit the armoured train that signifies the last stand before the revolution. 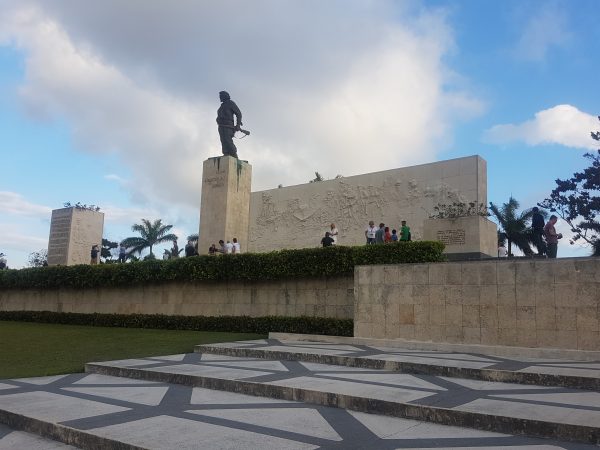 2. Che Guevara’s memorial statue & museum. A deeply significant monument, there are no cameras allowed inside the museum or memorial. The statue, which stands tall on top of
the museum with steps leading up to it, has a definite shrine quality; such is the significance of Che to the Cuban people. Take the opportunity to learn about recent history and explore Che’s life inside the museum before visiting the peaceful memorial, built to reflect a Bolivian rainforest. The statue above was built out of donated wares from the Santa Clara people.

FACT BOX:
We visited Cuba as part of the
FITCUBA Fair where the UK was the guest country for this year’s annual event.
We were invited by the Cuba Tourist Board on behalf of MINTUR. For more information, please visit travel2cuba.co.uk and cubatravel.cu

10 reasons why we think the new Netflix show 'Insatiable' is problematic...