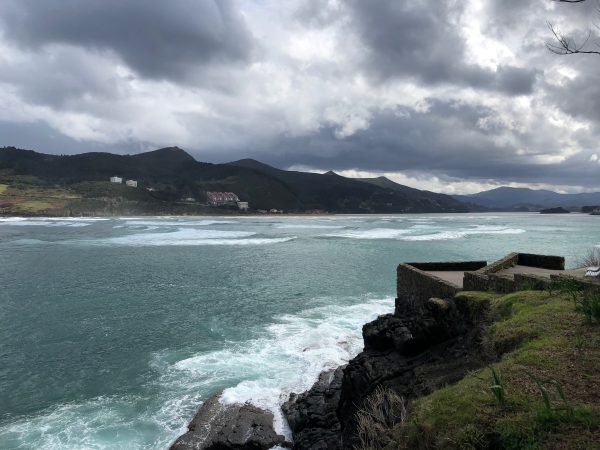 Bilbao might not be the first (second or even third) place you think of when you consider visiting Spain, and because of this, it’s unexploited vibe is part of the appeal for the adventurous.

Situated on the rugged coast of Northern Spain (otherwise known as Basque Country), it neighbours the more popular holiday destinations of San Sebastián and Santander. But even though Bilbao has the reputation of being a gritty industrial town in the seventies, it is now a emerging destination for culture vultures, who flock to see the impressive museums and modern architecture, which rub shoulders with proud Basque country roots. 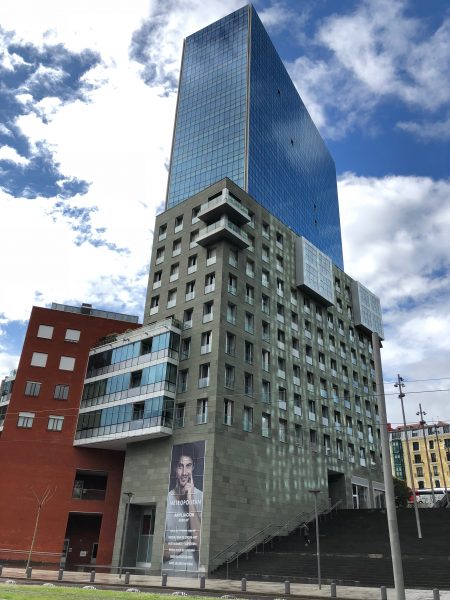 Mostly known for its mismatched buildings- saturating the old and the new, traditional food and football, it’s soul remains enigmatic and uncommercialised. The locals are cool, erring on the scarily cool. The city’s vibe is young professionals, who like to party at reggae clubs and techno nights which begin around 1am and end when the last person leaves.

The seaside is a drive away but you can catch the futuristic (Sir Norman Foster designed) Metro which whizzes you there in 30 minutes. Miles of sand and clear water caress the bays, making it perfect for swimmers, surfers and suntanners; And although there isn’t the lounger and brolly culture, it’s a great place to BYO and chillax. The most popular patch for  learning to surf is Sopelana, which neighbours a nudist beach. But venture a little further east, and you will reach the craggy bay of San Juan de Gaztelugatxe, a location from Game of Thrones. Join the tourist trail to ring a bell on the island to bring you luck, and get some very enviable Instagram pics! 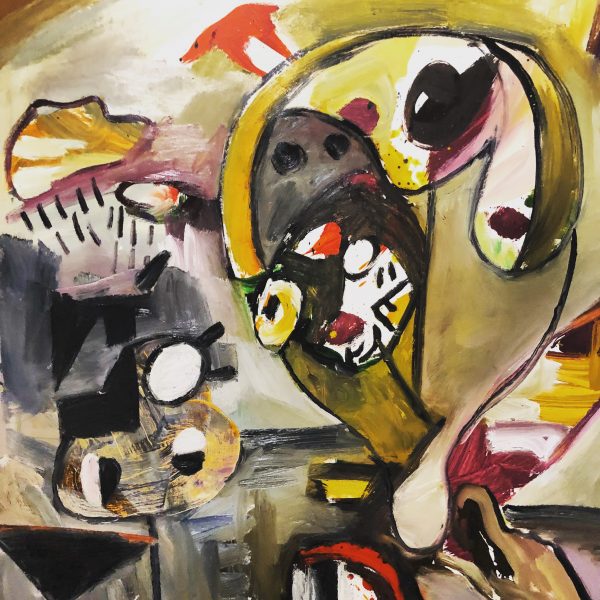 With so much on offer, Bilbao is the perfect place to escape to for a beach and culture break. 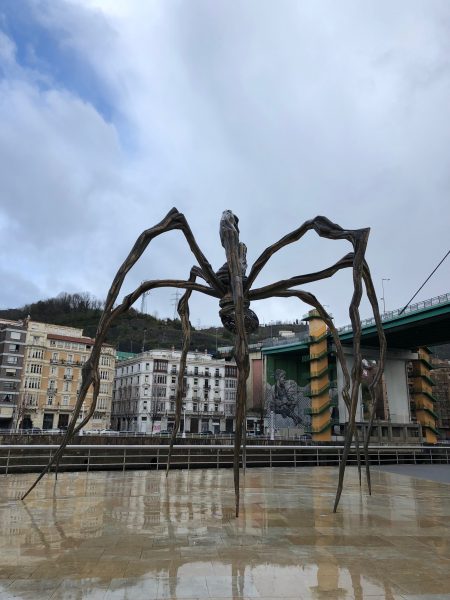 A visit to Bilbao wouldn’t be complete without going to the Guggenheim Museum; Standing proud on the banks of the Nervion River, it houses a treasure trove of contemporary artists including Andy Warhol, Anish Kapoor, Jeff Koons and Eduardo Chillida, along with visiting exhibitions. It is transformed into a club night on one Friday every month, when it opens it doors for Guggenheim Lates. From 10pm to 1am you can wander round and see the greats, and join thousands of other revellers dancing to EDM in the museum’s impressive main hall.

You may want to re-visit in the daylight to enjoy Louise Bourgeois’s disturbingly realistic giant metal spider which straddles the sidewalk on the banks of the river; Whereas Jeff Koons’ living flower “Puppy” sculpture is much friendlier welcome to any visitors.

It would be easy to spend a whole day admiring the gallery building as well as the art work, and it never gets as busy as it’s New York or Venice counterparts. 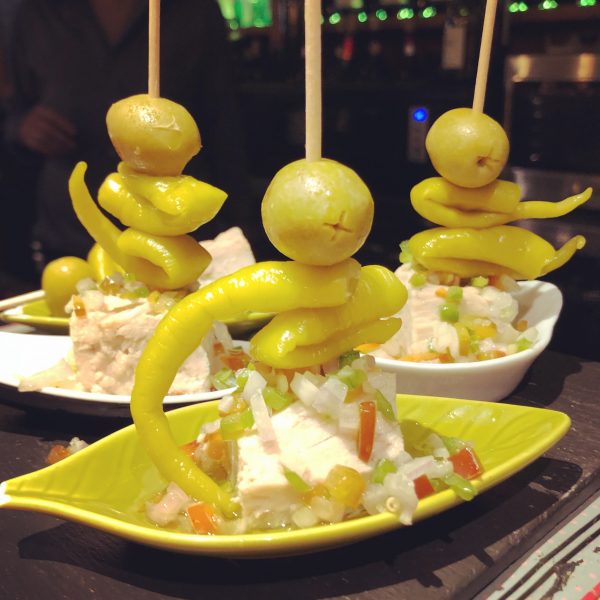 The Casco Viejo is Bilbao’s Old Town and one of its most intriguing areas and remains true to its medieval roots. There are seven major streets which are great for exploring (or getting lost in) and you will find local galleries, boutiques and traditional pintxos bars. And if you have never sampled a pintxo before, think Spanish tapas, where you help yourself to what you fancy and pay for what you’ve eaten by totting up your cocktail sticks! Spain isn’t the most veggie friendly country, but there will be plenty of cheese and egg. And bread, with most of these mini delights being layered on chunk of fresh bread. 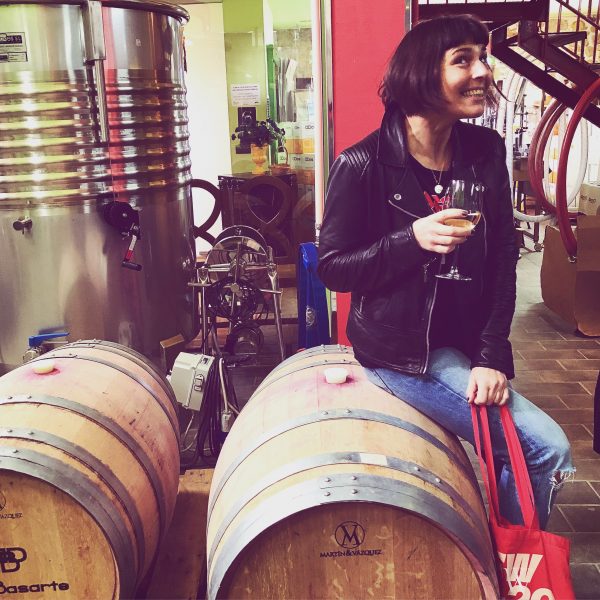 With so much good food available it’s no wonder the Bilbaínos pride themselves on their local wine too. Dry white is particularly popular, with the blend ‘Txakoli’ the region’s speciality.

Sample this straight from the vineyard at Bodegas Ados Basarte, where it is produced by two local sisters who are happy to share their knowledge and passion (Understanding Basque helps!) 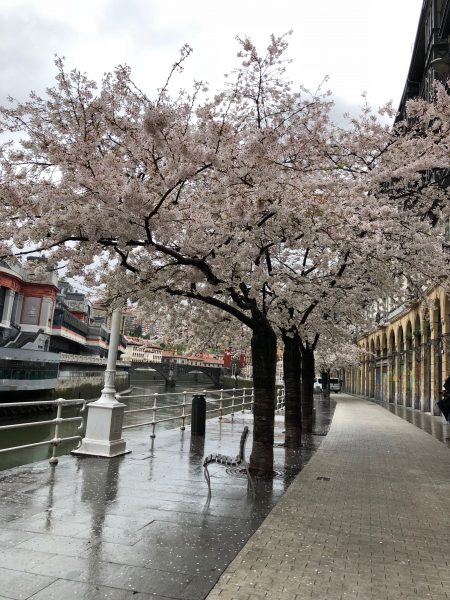 Hire a bike, or even better join a (bike or walking) tour, for a full rundown on Bilbao’s history. Dedicate a morning to take in the modern street art, which nestles alongside ancient paint-cracked buildings which seemingly have been untouched since they were built, and then explore the impressive art-deco style Mercado de la Ribera; Covering 10,000 metres it sits right on the river. This working market sells all kinds of fresh spices, vegetables, fish, meat and flowers and is a perfect setting for soaking up the local culture or enjoying a coffee or other beverage in one of the restaurants and bars. 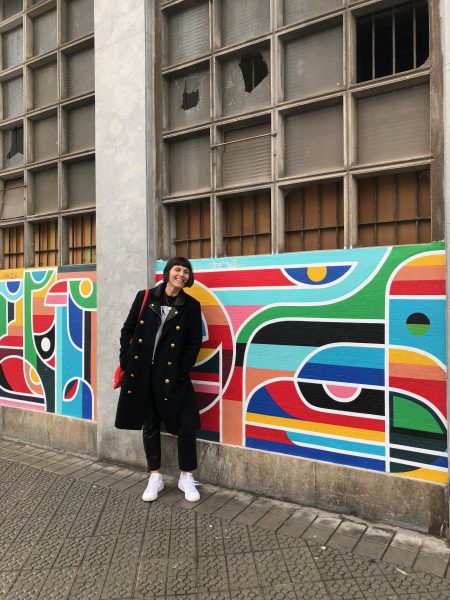 For a break with surprising twists, try and time a vacation for the After Hours at the Guggenheim, book for a secret supper club dinner at Epelde & Mardaras  (an apartment turned art gallery turned restaurant), take a couple of days out for the beach and book in for an intensive course of surf lessons where you will apparently you will be riding the waves in one day!  And if you time it right, hit one of the town’s plentiful fiestas or massive monthly Sunday market.

The perfect time to come is the summer and with the super cool BBK Live festival taking place 12-14 July, you can see international DJs alongside the Gorillaz and High Flying Birds in a stunning mountain top location. With the party starting at dusk, you can have a week of music, culture, amazing scenery and a beach break all wrapped into one. And with drinks being ridiculously cheap, I predict Bilbao to be on the up. And up!