Fashion
June 28, 2017
by SLiNK
0
Last night the world finally got to get a peek at Rebel Wilson’s new line RebelWilsonxAngels due in stores soon. The launch was hosted by plus size fashion subscription box service, Dia & Co and attended by the hottest influencers in the curvy game, many wearing the Grease-inspired “Rebel” “Pink Ladies” bomber jackets.  Rebel revelers were invited to get manicures, sip specialty Svedka cocktails and pose with hand-painted tiles emblazoned with the slogan of your choice.
We got a chance to catch up with plus size models Emme and Hunter McGrady, who were in attendance to support along side the biggest plus size bloggers and Refinery29. Style icon Stacy London was also there to express her excitement over the line. We got to chatting about style for all sizes and she said that it’s not about beauty but really about self-expression and how we feel. I completely agree because when I feel good about what I’m wearing it can give me a whole new pep in my step. London also said that she hopes that the fashion industry will realize that other body types and communities need help having more choices for clothing, from petites to the trans community looking for more to suit their needs and desires. 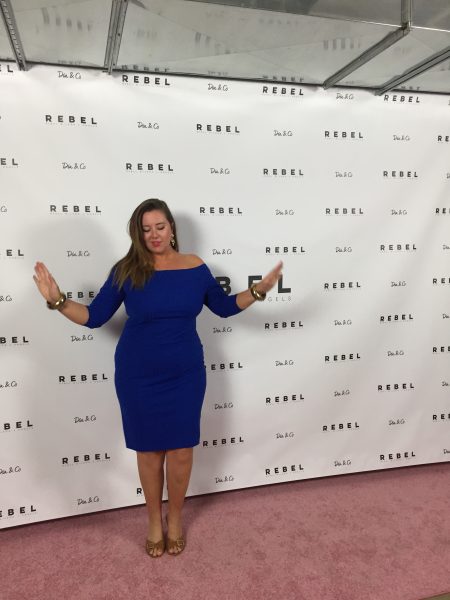 It won’t be hard to feel good about yourself in these Rebel pieces that have be designed for a jetset, stylish lifestyle like her’s. It has been described as “9 to 1” not “9 to 5” wear because many pieces are comfortable, versatile and can be worn from 9am all the way through your evening plans! My favorites are the leather-like green waterfall cardigan and the suade Moto jacket (first shown in electric blue but will be coming in red and green later). The jeans, some with stud details, are so comfortable while keeping shape that they can keep you looking pulled together even if you rolled off a transatlantic flight!
Later in the night, Rebel spoke to the crowd wearing her cutout LBD design and sporting a gorgeous bouffant updo. She is just as funny, confidant and personable as we all had hoped as we secretly wanted to be her BFF the instant  she came into our movie theaters. When asked what inspired her for the line, she said she wanted to give women more options and does not want to be exclusive but inclusive. She credits her own style of sexiness, confidence and affinity for body con, for the chic curve hugging styles of her designs. She also let partygoers in on what she has coming up next aside from the highly anticipated Pitch Perfect 3. The crowd went wild when they learned that she would be cast opposite stud Liam Hemsworth in a romantic comedy where, as she said, “the plus size woman is the romantic lead and no longer just the funny friend.” Right then and there, amidst mannequins with lustworthy outfits, Rebel embodied what every plus size woman wants to be. This is our reality. Fierce, happy, sexy and living our best lives. Now we have a new clothing line, priced $300 and below, in which to live it!
#GetYourRebelOn at Nordstrom’s mid-July, Dia&Co in August/September boxes and other major retailers such as Dillard’s, Lord & Taylor, and Addition Elle in the coming months. 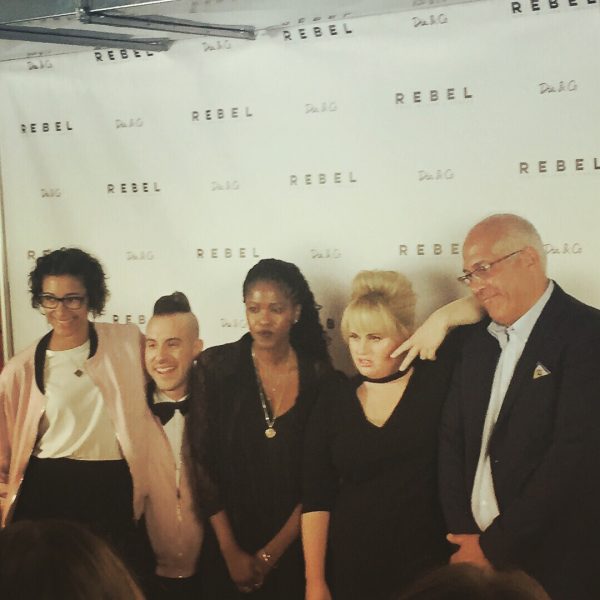 Get 20% off at plus size brand: Navabi